MADISON – In Wisconsin, 83 lawmakers repeatedly stood up for tax cuts, pro-growth reforms and investments in our state’s workforce this past legislative session. Each of these legislators supported initiatives that will spur economic growth and job creation by putting an emphasis on improving Wisconsin’s business climate. 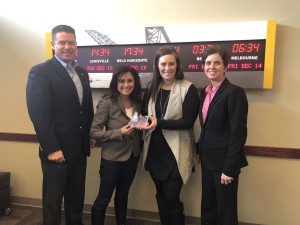 WMC, the combined state chamber of commerce and manufacturers’ association, is recognizing individual lawmakers with a prestigious “Working for Wisconsin” award in response to their efforts to keep the state moving forward.

The Working for Wisconsin award recognizes individual legislators who supported specific pro-growth policies and earned at least a 70 percent rating on WMC’s legislative scorecard. During the 2017-18 legislative session, Rep. Rodriguez voted 100 percent of the time to support a stronger Wisconsin economy.

“Rep. Rodriguez is a solid leader who has delivered tremendous results for taxpayers and the business community,” said WMC President & CEO Kurt R. Bauer.” Rep. Rodriguez has a passion for policies that support job creation and economic growth, which is imperative to our state’s future.”

WMC is presenting 83 legislators with the prestigious Working for Wisconsin award, and 68 award-winning lawmakers tallied 100 percent voting records on the WMC scorecard.

“Legislators earned this award because of their continued efforts to make Wisconsin a destination for new and expanding businesses,” added WMC Senior Vice President of Government Relations Scott Manley.” Additionally, these policies have made Wisconsin more attractive for talent as we look to grow our workforce.”

WMC’s voting scorecard is graded based on the key votes affecting industry and based only on the lawmaker’s individual voting record, despite partisan affiliation.

“Wisconsin has now witnessed four consecutive legislative sessions dedicated to passing pro-growth reforms, put in place and signed by Gov. Scott Walker,” added Bauer.“ As our economy continues to expand, it is important that we have a legislature who understands the need for continued reforms.”

WMC and its members thank Rep. Rodriguez for their commitment to Wisconsin’s businesses and workers.

“We look forward to our continued work with Rep. Rodriguez as we make Wisconsin the best place to live, work and play,” Manley concluded.

Rep. Rodriguez was presented with the award on December 13 at Caterpillar in South Milwaukee.