MADISON – In Wisconsin, 82 lawmakers repeatedly voted to promote job creation and wage growth during the 2019-20 legislative session. Each of these legislators, including Representative Jessie Rodriguez, supported pro-growth policies and reforms aimed at improving the state’s business climate. 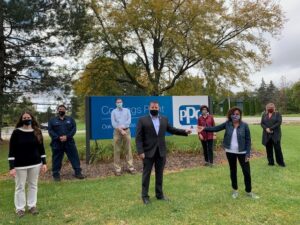 “Wisconsin is very fortunate to have a pro-growth legislature with leaders like Representative Rodriguez who consistently vote to cut taxes, improve our regulatory and legal climate, and invest in our state’s workforce,” said Kurt Bauer, WMC President & CEO. “While our state’s economy has faced many challenges this year, that only reinforces the need for policies that promote job creation, rather than prevent it.”

WMC and its members thank Representative Rodriguez and all of the winning legislators for their commitment to Wisconsin’s businesses and workers.

“We look forward to our continued work with Representative Rodriguez to make Wisconsin the best state to live, work and play,” Manley concluded.

Representative Rodriguez was presented with the Working for Wisconsin award on September 29 at PPG Industries in Oak Creek.

MADISON – On Thursday, the U.S. Bureau of Economic Analysis released second quarter data on the country’s GDP that showed the U.S. economy is in